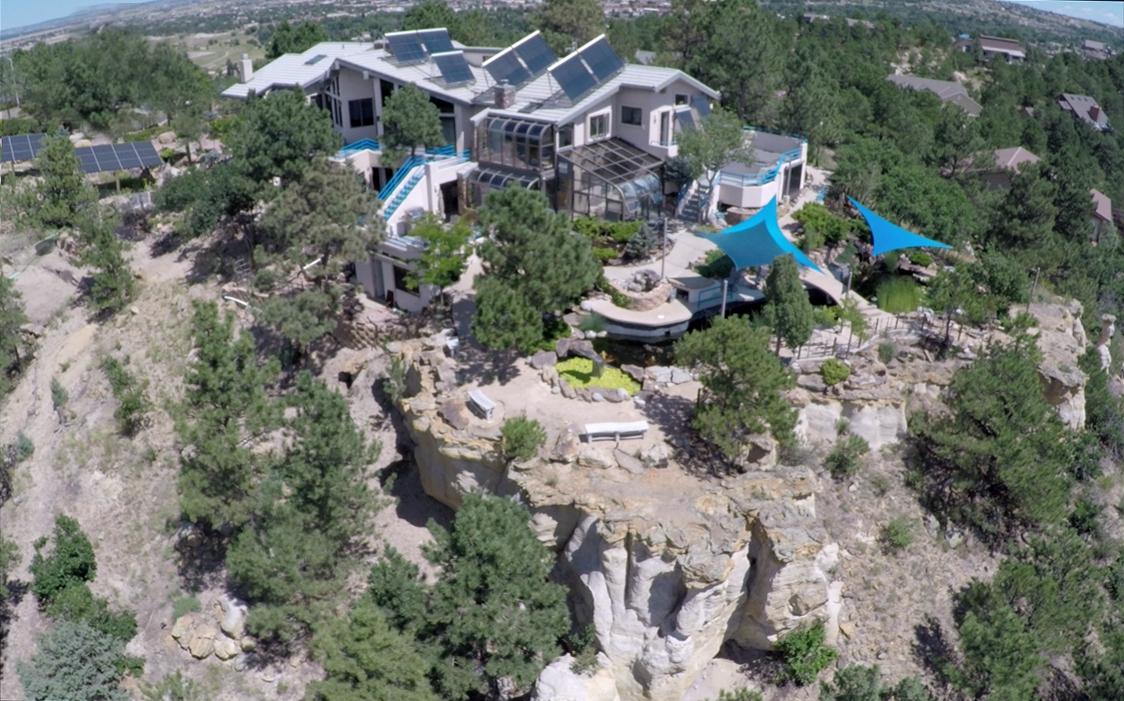 The evolution of this 2 acre property began in 1976. Construction of the first phase began almost immediately. This phase was completed in 1978 as a three bedroom two bath split level home.  2500sq. ft. was finished upstairs and a 2000 sq. ft. walk out basement was left unfinished.

The first addition was done in order to expand the Master Bedroom for a walk-in closet.  A solid wood beam replaced the exterior bearing wall in order to install the sunroom.

Master Bathroom was done 10 years later; it was expanded by removing an exterior wall and creating room for a utility room and a door to the adjacent hot tub.  The solar room completed the southern addition to the house.

The large Koi pond was built on the land between the house and the south cliffs.

Retaining Wall for the Main Pond, hand dug with jackhammer and wheel barrow.

Supporting the Master Bedroom was a steel beam.  After creating the pond there was no need for access for heavy equipment; it was then possible to create a foundation for the holding tank pump house.

Completion of Pump House and Bridge Access to Main Pond

The east side consisted of two levels.  The upper level is the front entryway to the house.    In 1978, the first project was to retain the steep slope leading to the front door with railroad ties and building a redwood deck.

Wood in the dry climate of Colorado deteriorates rapidly. Railroad ties and the wood deck were replaced with large boulders and landscaped initially with lawn and then with water tolerant native plants.

As Koi kept growing we needed a larger pond….

Installing pipes between the inside water feature and the future pond for Koi to swim between the two, creating larger water volume from 700gals to 4000 gals.

Creating a Monolithic pour – walls and floors without a seam.

East Side – Stream and Patio

1978 The first house built looks like a mobile home!  Needed much improvement…

A New Patio off the Kitchen

Although the patio was a nice, functional element, Ray felt the front pond needed a stream for aeration and wildlife habitat to support the front pond.   Therefore, he had to demolish the patio, build a stream out of liner, wire mesh and concrete.

Tearing Down Patio – Beginning of the Stream

Liner for the Stream

The north side includes the garage. Expanding the garage from 2 car to 3 car began in 2003 required a major demolition.

Above the garage a guest bath and bedroom were greatly expanded. The other guest bedroom was left intact.

The west side is ongoing. Enclosing and creating a heated sun room under the west deck was completed in 2013.

Before the enclosure of the west deck

This required building a ceiling under the deck so that this room would be waterproofed and could allow for the insulation necessary for in-floor radiant heat.

Access to an outbuilding (tree house) and a pathway to the (future) greenhouses and park is still being developed (2015).

Finishing the lower floor of the house required storage for the things accumulating over the past 30 years. The solution was building a “Tree House”,  named by neighborhood children as they watched the construction of this outbuilding.

Additional access was created from the driveway. This Tree House became more than just storage; it houses bicycles, garden equipment, power wagon, wheel barrows, etc.   It will also be an integral part of the greenhouses, and part of our research for growing plants from seed. So we can now say we have three levels and a versatile deck for observation, small concerts, and outdoor camping facility.   We are also planning a bio-degradeable outhouse.

The Tree House overlooks an area that is being developed for the new gardens and greenhouses.

Also under development is continuing the accesses from the tree house to the future greenhouses, and a path connecting to the social trail which leads down to the park